The new AKASO Brave 7 LE action camera is designed for summer vacations whether for you that is near or far. “Staycations” deserve documenting your memories, too, and this new camera is waterproof making it especially popular for families. It is similar to a Go Pro with flexible functionality and utility in many situations although it is limited to 4K, 30 frames per second in comparison. 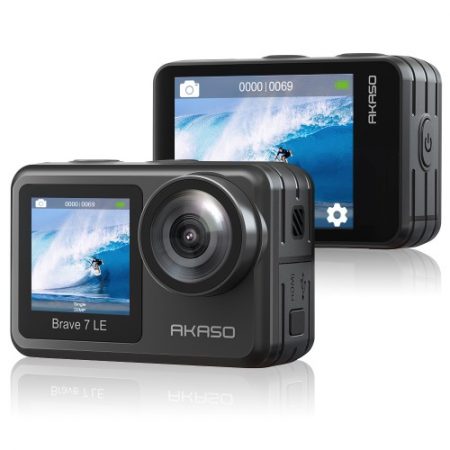 Known as an action camera, it comes with screens on both sides of it making it easier to take pictures when using it during sporting activities. I especially like that the subject of your photo can see what is being recorded and knows exactly where to look given the large lens.

The user of the camera should know, however, that the screen only works on one side at a time; it is really easy to switch between screens via a button on the top. This means that the person taking photos and those in the photos cannot simultaneously see what is being filmed. It is either one or the other. One of the two-inch screens is touch screen while the other is not. When using this outside, it can be hard to see the screen from certain angles, and there is no way to adjust the brightness.

Remember that action cameras are generally used for zoomed-out scenes; if you try to zoom in too close, it becomes hard to focus. When using this while moving, the camera has a 6-axis gyroscope design that is designed to correct any vibrations and create a smoother video.

I noticed that the internal microphone on the camera is pretty solid, but like most recording devices, it picks up every sound including wind when you are outdoors. You will especially notice this if you are moving quickly when recording like riding a bike or using it on the beach, for example. Indoors, there is a slight echo sound, but this is no different from other internal microphones found on an iPhone or iPad. This camera really offers quite solid recording capability in both picture and volume.

The camera has great battery life. It comes with two batteries and a charger, which allows for at least one hour of high-definition video when using the 4K capability. Another neat feature is that you can be charging the battery and taking video or photos simultaneously, which is especially helpful.

It comes with a remote control that allows you to start and stop recording as well as to snap photos. I really liked the aesthetics of the camera given the large front and back screens and rather sleek look.

The case has a detachable rod and mount, which are appreciated inclusions and easy to screw on to the base of the camera. Using this stabilizing rod helps to keep the picture from being too wobbly or irritating to the viewer. As a novice camera user, I was especially impressed what a difference it made using this rod. 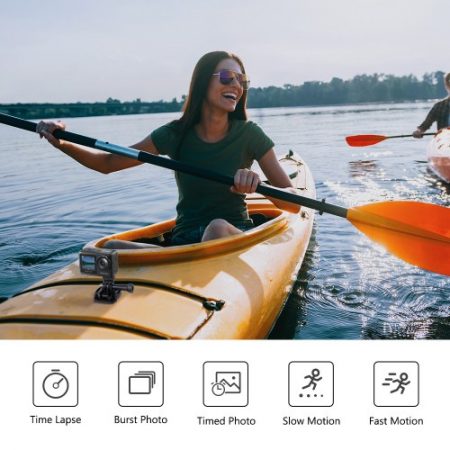 This action camera is water-resistant and can be used in the rain without using the case although if you are going to take it to greater depths (like diving, for example, or in the swimming pool), it is still smart to use the case that comes with it. This is AKASO’s first camera to offer such water-resistant capability.

I really liked that it has a built-in wireless feature that allows you to sync photos and videos with your phone and even with your TV via a built-in HDMI port. The all-weather camera comes with a waterproof case, which makes this great for those planning to record a lot of things outside by or in the water this summer. Just keep in mind that it is not ideal for filming dark scenes at night.

The new, water-resistant AKASO Brave 7 LE action camera retails for around $140 and makes a great alternative for families and novice photographers that don’t want to spend as much on a Go Pro and don’t necessarily need super-high quality, commercial recording capability. There are a lot of camera options out there, and this is among the best for the casual film makers among us. It is available via the AKASO website and via Amazon at half the price of Go Pro devices.

Ramsey Qubein is a travel journalist who has visited 154 countries covering the hotel and airline industry from every corner of the globe. His work appears in travel publications and outlets including Travel+Leisure, Business Traveller, Airways, Singapore Airlines’ Silver Kris, US Airways magazine, Northstar Travel Media, Yahoo Travel, and BBC. He serves as the National Hotels Travel Examiner and writes for numerous blogs and web sites. He travels more than 350,000 miles a year and is highly recognized as an expert in loyalty programs, business travel and the luxury travel segment. You can follow him on Twitter at DailyTravelTips or at his website www.RamseyQ.com.