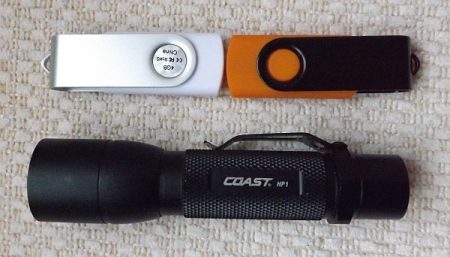 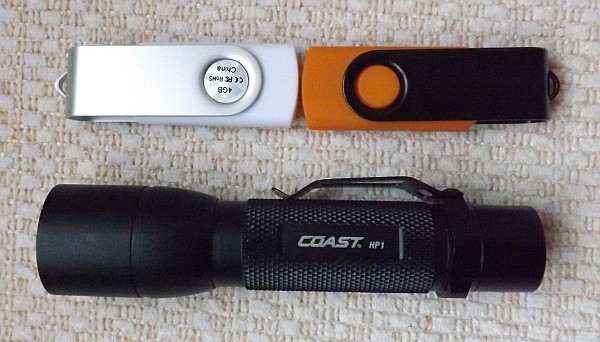 If you haven’t bought a flashlight in a decade or two, you might want to go for an upgrade. This little HP1 model from Coast Portland embodies all that has changed since your dad lugged around a big light with D-sized batteries in it. It’s small and uses a single AA battery, but cranks out a lot of light for a long time.

While battery storage capacity hasn’t kept up with our appetite for portable electronics and hybrid cars, other aspects of technology have followed Moore’s Law or at least gotten much smaller and more powerful in the past two decades. This is not just true for your phone and tablet: the humble flashlight has taken great leaps forward in how many lumens of light can crank out of a small package and one LED bulb.

While this Coast light uses a single AA battery, the output is 68 lumens when using a rechargeable battery. It rises to 92 if using an alkaline one and a blinding 220 lumens with a lithium ion battery. At that point you could shine a light on someone standing on the roof of an 50-story skyscraper. Despite that powerful beam, your torch will burn for an hour and 15 minutes solid to more than three hours depending on which kind of battery is inside.

The HP1 retails for $10, but this is no cheap-feeling light. It’s got an aluminum metal housing that’s watertight enough for a rainstorm and the rubber-coated switch makes a nice satisfying click when you turn it on and off. Furthermore, this is a focusing flashlight that gives you control over the width of the beam. It’s not like the old Maglites though where you unscrew the housing to do this. It’s got a sliding mechanism on the front where you just push up or pull back to make the beam more focused (for working on a specific task perhaps) or very wide (for a group walking down a dark path.)

There’s also a metal clip attached so you can hook it to a pocket or a bag. As you can see from the photo at the top, this is not going to take up a lot of room in your backpack when you’re heading to the backcountry or going traveling around the world.

Coast makes a whole lot of other larger, more badass lights if you are a serious camper or boater who is not trying to pack light, plus they have some rechargeable versions that you can just plug in to power up again. But for recreational people who just need a powerful light in a small package, this version packs a lot of punch into a small one-battery housing. It also comes with a lifetime warranty.

The HP1 lists for just $10 (great gift item) and you can get it at many outdoor stores or at Amazon.