Coolers are for summer trips to the beach, camping, long road trips and even backyard barbecues, right? While most of us will wait until the summer to use a cooler, I must tell you that after I purchased my Yeti cooler, I had to use in the winter first!

The Yeti cooler isn’t like any other cooler you’ve likely used in the past. You might think of a cooler as a heavy, boxy piece of equipment that is bulky and takes up a lot of room in your car or tent. However, the Yeti cooler comes in a bag style, making it light weight, and even large enough for more than a six-pack and ice. 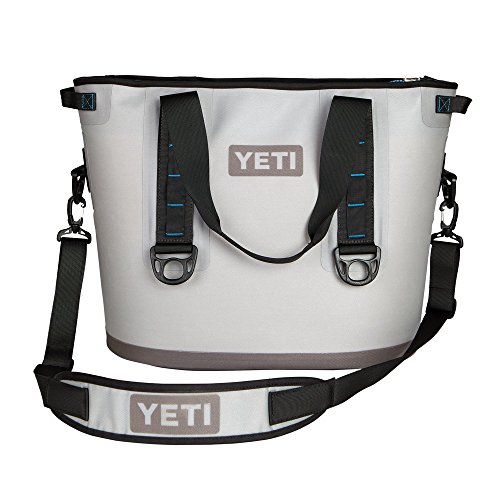 Even if you’re traveling by car or boat, hard-sided coolers can take up a lot of room. But if you want to keep your beverages and food cold, what do you do—suck it up and haul it along anyway? The solution to your problems may lie in a soft-sided cooler, like the Yeti Hopper 30.

The cooler measures 22.5 inches wide by 16.5 inches high by 12 inches deep, making it roomy enough for more than just a six-pack and ice. The Dryhide shell construction is similar to high performance whitewater rafts, and the addition of 1 inch of Coldcell insulation on each side and 1.5 inches on the bottom keeps your cold items cold. My cooler retained ice and kept my six-pack cold 24 hours after I stocked it.

The EVA (ethylene-vinyl acetate) base is like the bottom of a shoe. Once I trusted how tough the Yetti Hopper was, I was throwing it down on concrete and rocky trails without a second thought. I also liked how easy it was to clean, requiring only a hose and rag. Just make sure cleaners with bleach and chlorine are avoided.

That shell construction is pretty solid, too. As I said above, I’ve dragged the cooler along trails, docks and parking lots, and only the most minor of scuffs showed after the battery of testing. Even the six D-rings held up through wrenching tests performed by tying it to a whitewater raft for a two-day trip.

The leak-proof HydroLok zipper ensures that you get where you’re going with everything you packed inside. It won’t allow liquid in or out, unless you open the cooler. The zipper takes a little getting used to, however, because it’s really stiff. But that’s better than allowing water and dust into your food and drink container.

The Hopper is much easier to carry than a hard-sided cooler, and you can even throw it over your shoulder and hike with it. Of course, that depends on your fitness at the time and how much you’ve stuffed the cooler. It’s also much easier to stuff into corners and keep out of the way on your travels.

One feature I initially overlooked (but later found invaluable) was the 6 d-ring tie-down points. They are reinforced and come in handy if you need to secure them on a boat or any moving vehicle.

Is the Hopper so good that it’s worth the extra money instead of a cheap soft-sided cooler? It depends on how much you want to use it. After testing it for more than a month, the Hopper kept my drinks colder and survived outdoor wear testing better than its less-expensive counterparts.

But if you’re only going to use it a couple of times each summer for picnics, this isn’t your cooler. If you care about the quality construction and durability because you’re planning to put it through several seasons of hard-core use, it’s the perfect fit.

The Yeti Hopper 30 comes in one color combo, Fog Gray/Tahoe Blue, and lists for $299.99 on theYeti website. It’s also available at REI. 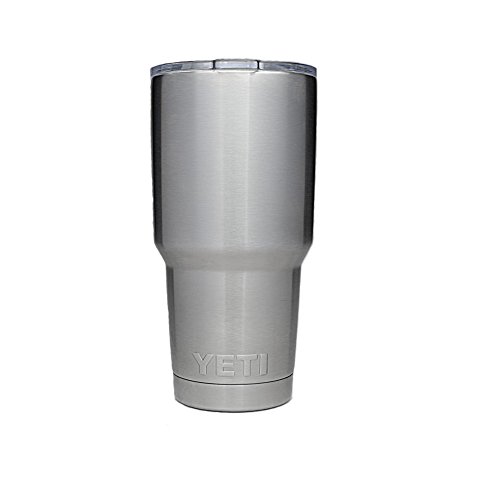 In summer, one of the top priorities whether you’re at home or on vacation is keeping your drink cool. If you prefer cocktails, iced tea (unsweetened or sweet), lemonade, or old-school water—Yeti Rambler Tumblers will take care of you. Summer drinks deserve to be frosty.

The tumblers use kitchen-grade 18/8 stainless steel and double-walled vacuum insulation to keep your beverage cool. Yeti maintains that the hard-wearing personal cooler maintains ice twice as long as plastic tumblers. At first, I had a hard time testing this, because I no longer have plastic tumblers. But after borrowing a couple from friends, my test quickly illustrated why I don’t have any. The Yeti tumbler kept the ice going far longer.

The removable lid is clear, which helps you see just how much of your drink you have left. It’s also easy to clean, and hasn’t broken despite my dropping it on the floor a number of times.

It’s not only cold drinks that these tumblers keep in their preferred state, but also hot beverages stay hotter longer. Sure, get more liquid when you run out, but there’s no need to get more ice or a warmer-upper pour—at least, not for a long while.

I tested hot coffee on my first day. I tend to sip on my java, and often get distracted with other tasks only to return and find my coffee cold. No such problem with this tumbler. It wasn’t until mid-afternoon that my drink started to cool down.

My ice test went well, too. I opted to buy a fancy iced coffee drink and was pleasantly surprised to find most of the slush still in my cup around noon.

The tumblers fit right into automobile cup holders, making it easy to give up your old commuter cup. The only thing missing in this model is that the lid doesn’t seal completely (specifically, the hole for drinking), so if you’re a splashy driver, you might want to calm that action down. Ditto for tossing the cup around.

We’re a fan of Yeti Coolers, despite the higher price. I loved using the Yeti Hopper, and Amy tried out the Yeti Tundra 45 Cooler (she has reviewed it below). Both will certainly keep your cold drinks cold, but the great thing about the Rambler Tumbler is that it’s sized for your hand (thus, no lugging around a big cooler), and you can alternate hot and cold beverages for as long as you want. See if a cooler will do that. I don’t think so.

If your whole family needs a tumbler, better think about labeling them so you know whose is whose, because they come only in a silvery stainless steel color. If you don’t get one for everyone, someone’s bound to “borrow” yours. I guarantee it.

The Yeti Rambler Tumblers come in 20-ounce and 30-ounce sizes, and list for $29.99 on the Yeti site. They’re also available at REI.

The colster is now a requirement on all of my camping trips. If you have an RV, it is a great idea to keep a couple of these on hand. Simplistic in its inginuity, it holds cocktail or pop, in a double-insulated housing with a screw-on plastic gasket to keep the can secure. Not only does it keep my drink chilled, I never have to deal with condensation. It’s one of those things I never realized I was missing until it came along.

The Yeti brand is known for its forward-thinking design and after trying out several of their products I can see what all of the fuss is about. The Hoppers retail from $300 – $350, while the Rambler tumblers go for $30.

I tried out Yeti Tundra 45, which is the second-smallest of 11 Tundra sizes. When ordering, I worried the 45 would be too small; in fact, it’s the same size of my largest, family-sized economy cooler, and still requires two people to carry when filled.

It fits perfectly in the back of the car for road trips and camping trips, and while I could perhaps go as large as a 50, I really don’t need anything bigger for a family of five.

For my Tundra 45’s first trip, we took it along on a two-night yurt camping trip on the Oregon coast for Thanksgiving weekend. (Yes, we’re nuts.) Though the weather was cold and rainy, we were still without refrigeration for 48 hours, and packed all our perishables in the Yeti.

For two days and two nights, I had no need to change out the ice in the cooler, and our steak, salmon, veggies, butter, and milk all stayed fresh.

Every Yeti purchase comes with tips on using the cooler to its fullest, and I followed the suggestions, keeping the cooler closed as much as possible, and filling in gaps with frozen bottles of water. In summer, we’ll also want to use ice blocks instead of cubes.

We brought the Yeti with us again for a road trip to California just a few weeks ago, where it performed just as well in a warmer environment (mostly in a heated car). Its ability to retain cold far outpaces our cheaper hard-sided coolers, and I absolutely cannot wait to road trip with my new ‘friend’ all summer long.

All Yeti Tundras feature ‘rotomolded’ construction, which means they’re virtually indestructible. I’ve seen Yetis go through the ringer on river rafting trips, trust me. The insulation is the best out there (each Tundra looks bigger on the outside, because the walls are so thick), and there’s a nice grip on the bottom to prevent the Yeti from slipping or sliding in a car, truck bed, boat, etc.

The double haul handles are very durable, and the drainage system is efficient and easy (though you hardly have to drain it, because the ice stays frozen for so long). You get a small dry goods basket that rests in the top section of the interior, and the lid snaps such securely with rubber t-straps.

The 45’s capacity is described as ’26 can’. We carry far more than cans of beverages when we travel, so maybe this is a more useful description: our Yeti 45 easily carries either

1. lunch and snacks for multiple days for a family of five,

2. the perishable ingredients for 2-3 dinners, or

3. six-eight water bottles and an assortment of cans or juice pouches.

The Yeti Tundra is bear proof (you’ll need to buy the lock accessory, but all Tundras are designed to accommodate it), and additional tie-downs can be purchased for use on boats.

It comes in white, desert tan, or ice blue and is available on the Yeti site. Is it worth the high price? For us, yes. We camp, raft, and road trip all year round, and this will be the last cooler we buy for years. If you’re the same, you’ll get the value out of it as well. Find it on Amazon for significant savings.