Don’t underestimate the power of a watch. While we all rely heavily on our phones today to keep an eye on the time or for an alarm clock, there are other situations when a wristwatch is more convenient (and even more durable than a phone…) Although it’s funny how because of Smart phones and other tablets and devices, watches in all of their forms have become almost obsolete, and even labeled “old-fashioned”.

However, they are starting to make a come back, particularly for die-hard adventurers that are looking for a watch or compass that is durable, water-resistant, and can endure harsh outdoor weather conditions and environments. Read on to check out some examples of top-rated watches and pocket watches by Wenger below. 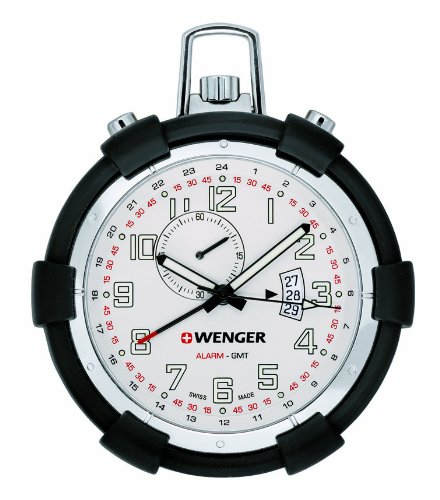 Pocket watches are super-popular again. Have you noticed? Yeah okay, we don’t call them that. Instead we call them “phones.” But reality is that many people have ditched their wristwatch for a timepiece in their pocket, so in a “what’s old is new again,” this double-duty pocket watch from Wenger seems appropriate.

It’s double-duty because this Swiss-made timepiece from Wenger is really billed as a travel alarm clock, but it’s one that’s rugged enough to carry around with you and it comes with a little clip device to hook it in or on your daypack. Or if you’re doing some activity where a wristwatch is probably a bad idea—like rock climbing perhaps—you could hang this on your belt. (Plus with some of the travel pants we’ve reviewed earlier, there’s even a loop inside the pocket this could hook to.)

This Traveler Pocket Watch is about as big as a men’s large wristwatch, so it’s not much to pack. It’s got a second hand, a date, and luminous hands that glow at night. The instruction manual says these recharge in seconds too, though I didn’t think to verify that until they’d already been in the light for hours. This being a travelers’ alarm clock, there’s also an additional hand that tracks a different time zone, such as your mom’s house when you’re on the other side of the ocean.

There are only three buttons and the main one on the top controls the usual time, date, and alarm sets. The right one turns the alarm on and off, the left one to set the second time zone. In other words, nothing too complicated. Since it’s from Wenger, the Swiss Army Knife people, it employs Swiss watchmaking expertise and precision.

This timepiece is also water-resistant to 30 meters, so no fear if it gets caught in the rain or you drop it in the sink. The steel case has a rubber bumper around it as well, plus a sapphire-coated hard crystal front.

The only complaint I have this travel alarm is the alarm part. It’s about as loud as an alarm on a digital watch. So on a scale of 1 being a mouse whisper and 10 being the howler monkeys outside my window last night in Costa Rica, this is about a 4 or 5.

So if you’re a light sleeper, it’ll be fine, but if you’re a heavy dozer that frequently shows up late for work, it could be trouble. It’s probably not louder in order to conserve battery power: as with most precision watches, the battery needs to be replaced by a pro.

This item is probably something you’re going to put on a registry or wish list for someone to buy for you since it typically retails for $160 up to $250. It’s got a three-year warranty though and is designed to last a lifetime. Plus it comes in a really nice metal gift box.

Pass it on to your kid later as you tell him or her about all your crazy exploits around the globe back in the day. 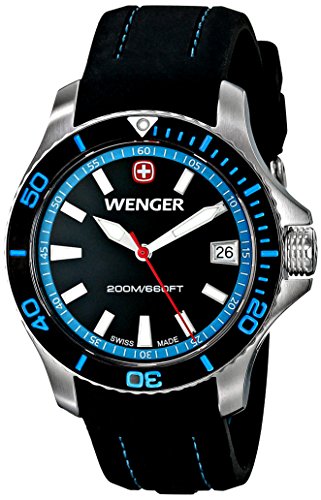 Sometimes, it’s more convenient to go old school and wear a wristwatch than it is to be constantly checking the time on your cell phone, or carry a pocket watch. One of those occasions is when you need your timepiece to be waterproof. It may be waterproof and analog, but the Wenger Ladies’ Sea Force Watch is far from old school.

The case is brushed and polished stainless steel, hands and markers stand out in white (and are luminous). There’s also a date display, for those of you who easily forget what the date is. Don’t laugh—I do that all the time.

The watch is water resistant to 200 meters, and the crown screws down to prevent water from entering the case. The watch comes with a silicone strap or stainless steel bracelet. I’ve got the silicone strap, which is soft and nowhere near as sweaty as plastic straps.

The bezel rotates one way, and it’s not as likely to spin on its own (or with the lightest touch) as many bezels I’ve seen. The bezel’s zero position has a luminous marker.

This is no delicate ladies’ watch. It’s chunky and solid. But it’s not too heavy, either. After a while, I stopped noticing it on my wrist and the little bit of extra weight seemed normal. I’ve worn this on a variety of water adventures, and it’s with me right now in Australia.

The watch comes in black & blue, black & yellow, and black & pink colors. I wanted a black & orange combination, but that’s only available in the men’s version. But I’ve gotten used to my color combo, and honestly, it’s really all about the watch performance.

Wenger Ladies’ Sea Force Watch lists for $250 on the Wenger website. On Amazon, it’s $200. You can also check prices at Overstock.com.