I travel with at least three devices I want to keep powered up so they can work seamlessly together: my Macbook, my Apple watch, and my phone. You probably have the same, or a combination of the same number. When I travel with my teen kids, the number of devices we want to keep charged up more than doubles, of course. Everyone wants to keep their iPhones charged, plus maybe Kindles and hot spots. 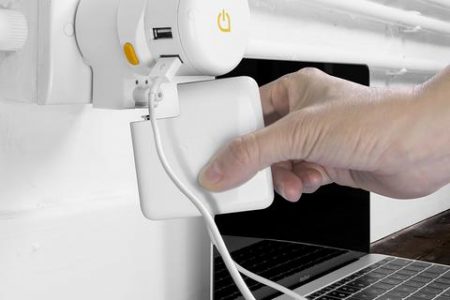 We have a decent world adaptor that comes included with two USB ports, but on our most recent international trip, to Iceland, we struggled to keep everyone’s phones charged. It became a pathetic competition of who had the lowest percentage battery, and therefore ‘won’ charging privileges.

Twist+ World Charging Station to the rescue! On our next trip, we’ll be bringing this bad boy, because it’s so simple yet so clever. Here’s what they’ve done: the Twist+ attaches to any Apple MacBook Power Adapter by replacing its attached plug or extended power cord. Once attached, the Twist+ World Charging Station does several things at once. You get worldwide charging of your MacBook (with multiple prong adapter options), but also get four (yes FOUR) USB ports for your iPad, iPhone, smartphone, tablet, what have you.

Once you have all your devices attached, just twist the middle dial to access the local plug you need (the adaptor works in over 150 countries), and boom! You’re powering up to five devices simultaneously from a single outlet. Truly, where has this been all my traveling life?

Get the Twist+ on their site for $44.99 in several colors, or look for it on Amazon for around the same price. You’re not going to want to travel with the family internationally without it, and it’s great for domestic travel, too, of course. Just twist it to the US option and use it on road trips to charge your devices in the car with your laptop, or in hotel rooms and at airports.