Two Polo Shirts Worth Packing for Your Travels

A polo shirt is a versatile piece of clothing to be packing when you travel. It’s nicer than a t-shirt, hits the “collared shirts only” requirement, can be used for a game of golf or tennis, yet doesn’t take up much extra room in your bag. Most polo shirts are made to be wrinkle-resistant as well, so they’ll look better coming straight out of your bag than a dress shirt.

I’ve been testing two that take it a step further though for travelers, building in odor protection, temperature control, sun blocking, and moisture wicking. They’re the kind of super-polos you won’t find on the clearance rack at Marshall’s. 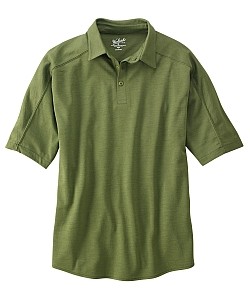 The Woolrich MNS Territory Polo has been in my wardrobe for a couple months now, on several trips, and has performed well. It’s made of a merino wool blend (half synthetic) that is odor resistant, wicking, and wrinkle-free. It dries quickly after a sink washing on the road. The Agion Active treatment adds another layer of stink-proofing and it worked surprisingly well: I wore it three days between washings in Bulgaria, one of those a day of heavy hiking in the mountains.

There’s a hidden zipper security pocket on the side, giving you another pickpocket-proof place to store some cash. It’s cut well to fit on the shoulders in a flattering way and keep seams out of the way of your pack or shoulder bag.

On the downside, I did notice a slight itchiness each time when I first put it on, something that happens with a lot of merino wool products that aren’t priced like luxury goods. After I had it on a while, I didn’t notice. It also suffers from the other merino problem of the fibers bunching up all around, so it doesn’t look as smooth anymore as when it was new. Not a biggie for me, but it could be for some people. (This is probably partly because I ignored the instructions that said to hand-wash it. Nothing I own is getting that kind of pampering when I’m home and it’s not practical for people who will use hotel/guesthouse laundry services.)

Overall though, this is a good quick-drying workhorse piece of clothing to pack for a vacation or extended jaunt. It comes in four colors, fits to size, and lists for $69. [Update – this style has been discontinued. See the Woolrich polo shirts page.] 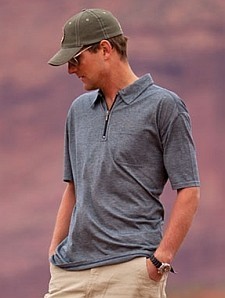 When I got the info about this Approach polo shirt from Mountain Khakis that incorporated recycled coffee grounds, I was more than a little skeptical. It sounded like a silly gimmick, Bluesign certified or not.

This is a shirt I would have picked up off the rack at a store though, it looks so good, so I was willing to give it the benefit of the doubt. I took it with me on the same three-week trip to Europe as the one above and have been thrilled with it.

As with the Woolrich one, after trying it out at home for a wash cycle first, I wore it on the road for three days without washing, one of them doing some hiking. Since I was with other people in a van, I wouldn’t do this if it was getting at all smelly. No worries though: it did a great job holding out until I could wash it. When I did, it dried by the next morning, despite being half cotton.

It has a YKK zipper instead of buttons, which I like, a breast pocket, and is cut to look good without being too clingy. I’m not as skinny as the guy pictured here, but it fits true to size with room to move. It comes in three colors and lists for $69.

Like other Mountain Khakis products, it’s well-made and comfortable, so this one has fast become one of my favorite shirts for warm weather.

[Update – Alas, this one is no more too. There is no similar MK option they’ve replaced it with, so search our other travel polo shirt reviews for alternatives.]

Tim Leffel is founder of the Practical Travel Gear blog, as well as the Cheapest Destinations blog and the narrative webzine Perceptive Travel. He is the author of The World's Cheapest Destinations (now in its 4th edition), Make Your Travel Dollars Worth a Fortune, and A Better Life for Half the Price.