Over the last few years, I have become obsessed with having just the right bag for each of my activities. I have been using an ancient Solomon ski bag since the early 2000’s that is finally getting close to the end of its life. When RMU Outdoors reached out to us to try out their new BRFCS I could not have been more excited. With our annual family trip to Taos coming up I had the perfect chance to put this adventure travel bag to the test. My concern was that even though the 35L bag expands to 50L it was going to be tough to get a week’s worth of clothes and ski gear into it but we’ll get to that in a bit.

First a bit about Rocky Mountain Underground. Unlike most gear companies they actually got their start building skis and for over 10 years they have set a new standard for high-performance ski’s designed for the biggest terrain the Rocky Mountains could throw at them. With their latest move into gear, they have brought their skier-first mentality that makes their ski’s so amazing to the gear that gets you to the mountain.

In the ultra-competitive world of “adventure backpacks” I have yet to find a convertible travel ski-pack that could actually hold my gear. While there are a lot of packs with the latest high-tech fabrics on the outside, when you put a pair of ski-boots in them you can end up shredding the interior lining (I may have done this more than once). The BRFCS using better interior fabric than a lot of bags use for the exterior and it really shows. With the amazing snow we have been getting in the west this season, I have had the BRFCS on 3 trips, including Taos and the section I use to hold my boots hasn’t shown any visible wear. 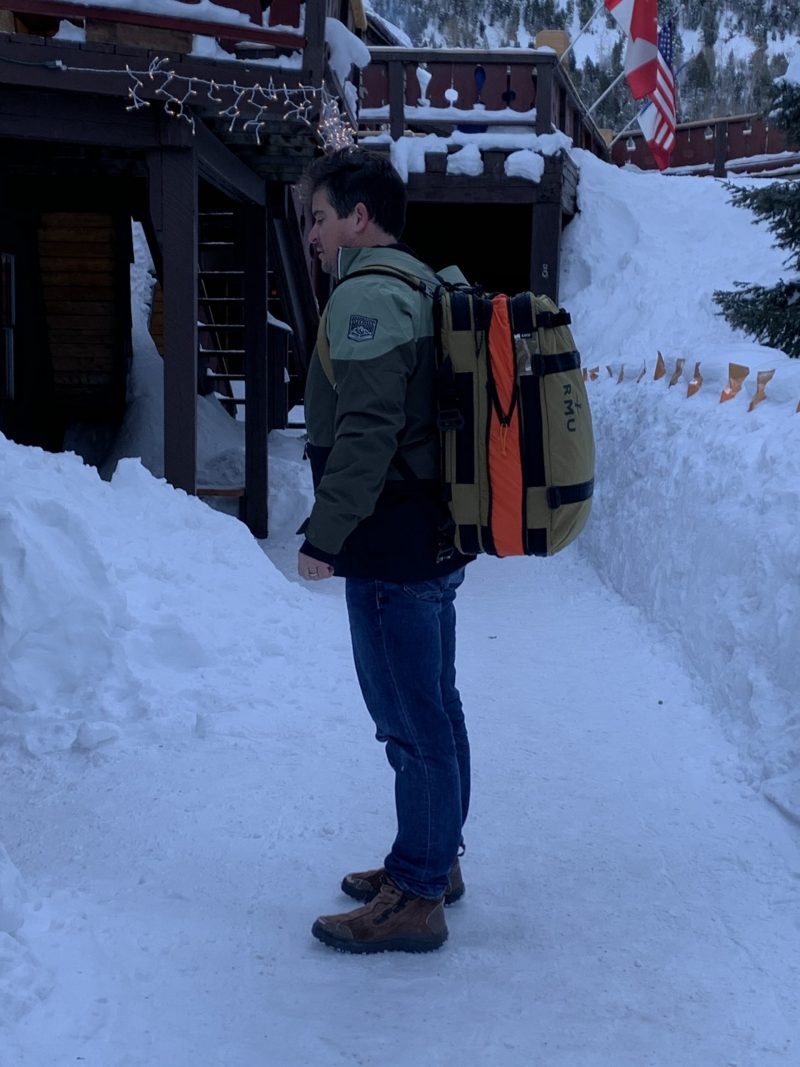 It’s great that the BRFCS holds my boots, but what about the rest? Back to my inaugural Taos trip, because I had to manage to get both my kids gear there along with a week of family gear I decided to see if I could fit everything (except my helmet) into one bag. Once I started packing I was astounded at how well everything fit. You can see from the picture below that all of my gear fit perfectly along with my clothes and toiletries. With the pack expanded to its full 50L I ended up with room to spare (that promptly was taken up by last-minute kids gear that they decided they needed. With the canvas straps pulling everything together and my helmet in the external sling, I managed to have my entire week on my back which freed my hands up to carry the rest of the family’s gear.

Since the Taos trip I have had the BRFCS in Mount Hood, Jackson Hole and I’m working on convincing my wife that a guy’s trip to Park City is a good idea. After these trips I’ve decided to retire the ancient Solomon bag to the garage to become an extra gear holder as I have found my new long-term ski bag. The bottom line is if you’re looking for an ultra-durable ski bag that can go from carry-on to full week adventure pack you need to take a hard look at the BRFCS.

Having spent most of his adult life traveling for business Chris is obsessed with the latest business and travel gear. He lives in Boise with his wife and 2 boys.