Outside Inside: Two Family Friendly Games for You

October 12, 2018 / Leah Guill / Comments Off on Outside Inside: Two Family Friendly Games for You

We love being outside as a family and exploring. But sometimes building a sandcastle for the millionth time just doesn’t keep anyone’s attention. Outside Inside from GSI Outdoors is always coming with us. On our latest trip, we took along the small and simple Backpack Shut The Box and the Freestyle Chicken Disk Battle.

Small enough to fit in the palm of your hand, the Backpack Shut the Box is a simple and fun game that everyone can get in on. The Outside Inside game is packaged in a rip stop and black netting carry pouch. The BackPack Shut the Box contains two dice, the paddles and instructions. 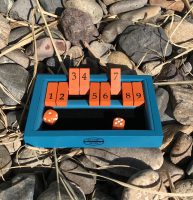 The game board and paddles are made from wood. The paddles flip up and are attached so you cannot lose them. Which we would, given the chance. The dice are plastic and are small enough for everyone to handle. The carry bag has a loop from the purse string closure that can easily be used as an attachment point for your backpack.

The Shut the Box game is easy to play so it is great for the whole family to enjoy. We did change a couple rules for our 5-year-old to make it a little easier for him. Each game takes about 5-15 minutes to play, depending on the players and their dice rolling ability.

I love this game for the fact that it is incredibly light weight, easy to clean with a simple wipe down and is great for hiking, camping, swim meets, airplanes and even to play in a restaurant while we are waiting for our food.

What a fun game! The Freestyle Chicken Disk Battle is a little bigger at 18×11 inches. 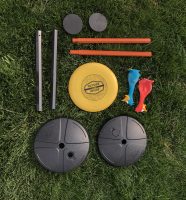 There is so much fun to be had with the Freestyle Chicken Disk Battle game! Included in the bag are 2 telescopic poles, 2 squeaky chickens, 1 disc, carry bag. 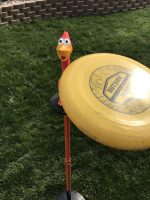 The set-up is quick and easy. It took maybe a total of 2 minutes and that was with help from the kids. The disc is substantial enough that everyone could throw it.  We played this game from lunch through dinner one night. 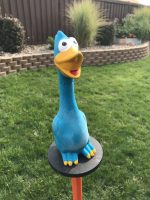 At one point, the kids decided that every hit of the opponent’s chicken meant their stand had to be moved back a space. This made for some hilarious attempts when the chickens were about 20 feet from each other.

Our dog was also obsessed with this game because it involved a flying disc and squeaking toys. At one point, he intercepted the disc and took off with it. Thankfully, he didn’t put any teeth marks in it. You have been warned about the K9 attractiveness of the Freestyle Chicken Disk Battle. 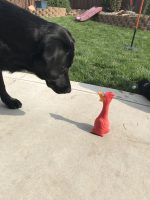 Oden and the Red Chicken

The whole Freestyle Chicken Disk Battle game in its carry bag weighs in at about 2 pounds and is large enough that you should use it for car camping, park and backyard play. It would be awesome to take to a festival and make new friends through a friendly competition.

Check out our past reviews of Outside Inside gifts for the family HERE!

Leah specializes in women's outdoor sports as well as our new yoga and SUP focused sections. Her favorite travel accessory are the ones who can pack a punch, do double duty and make traveling with kids easier on everyone! She lives in Idaho with her husband and two sons.