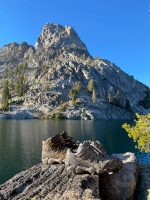 My new Oboz Sawtooth II boots came in the mail the night before my first backpacking trip in four years. I sat there staring at the new lightweight wonder boots and my old school leather indestructibly and heavy clodhoppers. Well, this was the last time I was going to do much with my daughter before she went off to college and she had a pair of these boots so I said, ‘what the hell.’  I will be a dork and match her. Plus, we were going into the Sawtooth Mountains and the Sawtooth II seemed appropriate.

The next day we set off on what my “friend” said was and easy 3-4 mile hike starting at lake Alturas in the Sawtooth mountains and going to lake Leigha at about 8500 feet. The trail took us through some pretty rough terrain.  There were a lot of downed trees, stream crossing and some marshy areas.  I had water come over the top of the Oboz high top boots several times. I had enough gear for two nights so 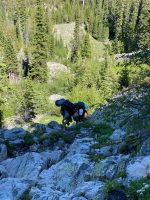 I had a fairly heavy pack. My friend and daughter kept slipping rocks into it for another 25 lbs or so but somehow they pulled them out before I could ever catch them.  They are quite sneaky. At the end of the trail there was no lake. There was a 45 degree incline over basalt rock, about three quarters of a mile more and pain.

When we finally arrived everything on my body hurt but my feet.  I had no hot spots or other marks on my feet even though I had never worn the Sawtooth II Oboz before this.  They are very light, comfortable and can handle the extreme terrain of the Sawtooth Mountains well.  We climbed over rock where we were on all fours or we were almost doing light rock climbing.  The traction of the Sawtooth II was excellent.

The outsole of the Sawtooth II Oboz boots has the mountain range of the Sawtooth Mountains in the tread of the shoes and I think that is why I was able to handle the terrain as well as I did.

The toes of the Oboz boots did have some visible wear after the hike up and back but the Sawtooth mountains are rough on any footwear.  I bet the Sawtooth II boots would not last more than 3 seasons of real backpacking but they weigh less than half what my leather boots do.  I would take the lightweight over durability any day, however.

Oboz can be purchased on their website and a selection is available on Amazon.com. Oboz also has a feature on their website that will tell you where to shop locally for their great boots! The Sawtooth II are available in three different colors and the fit is true to size.

For the record, my daughter said she will never go backpacking again.

Geoff is a new writer for Practical Travel Gear. He enjoys the outdoors and loves adventures with his four kids.

Leah specializes in women's outdoor sports as well as our new yoga and SUP focused sections. Her favorite travel accessory are the ones who can pack a punch, do double duty and make traveling with kids easier on everyone! She lives in Idaho with her husband and two sons.