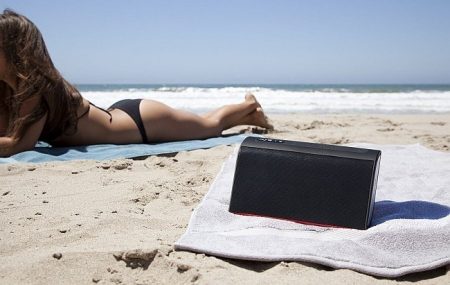 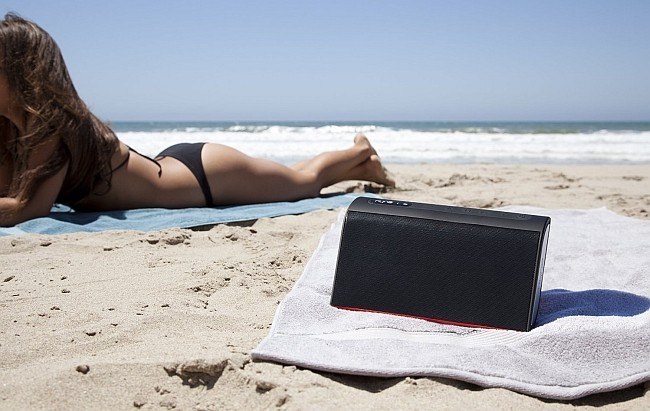 Tired of little Bluetooth speakers that easily get drowned out by conversation? This TT one from NYNE might not go on a plane with you if you’re just packing a carry-on, but for checked bags, a road trip, or car camping, it’s a wireless party machine.

This is not some “mini and tinny” travel speaker where it’s the size of a golf ball but has about as much bass reflex as a parakeet. With the volume turned to 5 you can fill up a good-sized living room with sound and with a few notches more it works for an outdoor party. You can’t realistically expect the full dynamic range you would get from playing a CD through two heavy home speakers, but for compressed files through Bluetooth in a two-pound 17-watt speaker, it sounds terrific—whether playing rock or rap or reggaeton. This is real stereo sound too, not a single speaker mashing the two channels into mono.

To see how easy the set-up was on this, I had my sister, who has never used Bluetooth before, unbox it and get it going. Since she had her music collection playing on her Android phone in less than five minutes, we can put a check mark beside “easy setup.” We played YouTube videos on it and streamed some music via the internet as well. In all cases the speakers sounded clear, with no distortion or background noise. 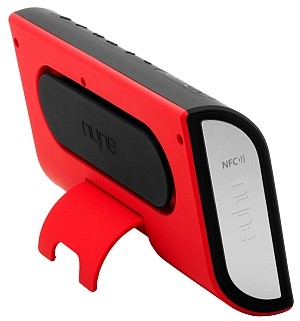 The system comes with four different plug attachments for use in other countries. They are quick and easy to change. The speaker can also be used with a wired device, via an AV port. It also has a USB connection, which can be used to charge other devices. If your phone starts dying and you need to keep the party going, just plug into the speaker and get more juice.

The speaker has a DC connection and cord, which can be removed when the internal battery is charged so the unit can be used when there is no electricity. When not plugged in, it’s rated to last 10 hours on battery party.

The NYNE TT Bluetooth speaker is a shade more than 10 inches wide, but only about 2 inches deep. It comes with its own carrying case and as you can see in that photo, has a built-in kickstand that folds out to keep it upright.

We could even stretch and justify this as “business travel gear” because once it’s paired up with your phone you can use it as a conference speaker phone as well. I can’t say I tested that part out though. It retails for $129 and comes in black/red or white/gray.

See more information on the TT model at the NYNE website and buy it online at Amazon or Best Buy.