I found it! I found what I have been on the hunt for all these years. A portable charger that will charge my laptop as well as cell phones. This tool is something that will solve a common problem for me. As a frequent traveler, I rely on my computer to get work done while in transit, but not all trains and planes have power outlets that are easily accessible.

Sometimes, I find myself in boardrooms or conference rooms where I am not seated near a power outlet or where it is not appropriate to string a long cord across the room. Or what about times when you are spending the day outside or in a coffee shop or park where you plan to use your laptop. Or the times when I am in the airport and all the power outlets are taken. There are so many uses for this device that discovering it will instantly make me more productive.

The MyCharge Adventure Ultra is the largest battery pack that myCharge produces and comes with both USB and a traditional AC outlet. Because of the standard plug, this means that the pack is a bit larger and heavier (just about one pound, which for its power is pretty impressive) than other charging devices. Its usefulness means that is hardly a problem for me.

It features four charging ports: an AC port, a USB-C slot, and two USB-A ports. The lithium ion battery has 13,400mAh of power, but this also means that it cannot be packed in a checked bag. I always have it in my carry-on or my briefcase if traveling on a regional jet because they are not permitted in the aircraft hold. Still, the company has incorporated safe-cell technology to maintain the highest levels of battery safety of this device. 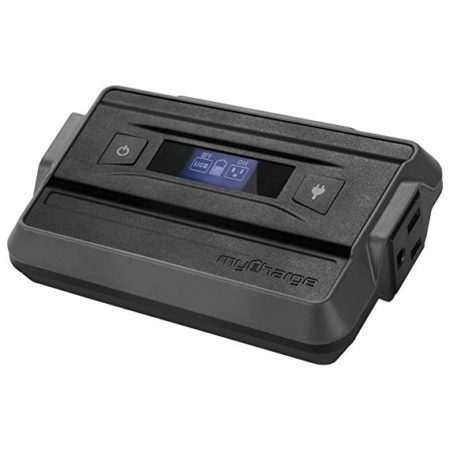 This is a great gift for those that like to go camping or spend a lot of time outdoors (say, on the beach this summer?). Of course, the device has to be charged up itself before you can maximize the full charging power for numerous devices simultaneously.

One thing I was worried about was that this would take a bit longer to charge devices than plugging it into the wall would. I was impressed at the standard speed at which it powered up my laptop. It was easy to use while on the plane, and I never had anyone question it (that was something else I was worried about when plugging my laptop into it inflight.

Even if you don’t use this often, the power bank is designed to maintain the pre-loaded amount of charge for as long as a year. That’s helpful if you forget to charge it up to its maximum capacity before you need it.

One thing to note is that it does not work with all laptops. The limit on this power bank is 45W, and some computers require greater power meaning they will not function properly. The MyCharge Adventure Ultra website lists the compatible computers and devices with this device. Of course, cell phones, cameras, tablets, and other mobile devices will more than adequately charge using this power bank.

I appreciated that the size was not too bulky, and it was easy to fit into a carry-on bag without taking up too much space or adding excessive weight (a big no-no on many foreign airlines).

It retails for $130 on the myCharge Adventure Ultra website or on Amazon, but I was more than pleased with the value I got from purchasing this AC power charger. In my opinion, it is a must-have device for frequent travelers.

Ramsey Qubein is a travel journalist who has visited 154 countries covering the hotel and airline industry from every corner of the globe. His work appears in travel publications and outlets including Travel+Leisure, Business Traveller, Airways, Singapore Airlines’ Silver Kris, US Airways magazine, Northstar Travel Media, Yahoo Travel, and BBC. He serves as the National Hotels Travel Examiner and writes for numerous blogs and web sites. He travels more than 350,000 miles a year and is highly recognized as an expert in loyalty programs, business travel and the luxury travel segment. You can follow him on Twitter at DailyTravelTips or at his website www.RamseyQ.com.