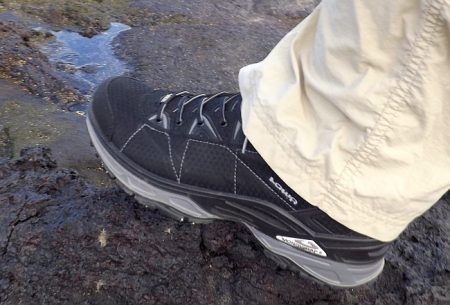 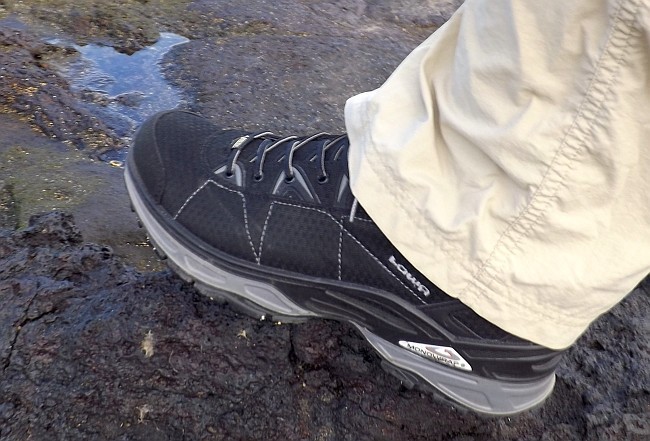 For those of us who like to mix a little adventure into their travels but aren’t hard-core hikers, shoes like these Lowa Ferrox GTX ones are a great bet. Lightweight, supportive, and with a Gore-tex membrane, they can be used on muddy trails but still work for schlepping around on cobblestones and sidewalks.

Hiking boots have gotten lighter and far less bulkier over the years, but they can still take up a lot of room in your pack and you usually don’t want to wear them the rest of the time. Lightweight hiking shoes, however, aren’t much bulkier than sneakers and can weigh about the same. I have taken these Lowa Ferrox ones on two trips now, including a recent one where I was in the Amazon jungle and then the Galapagos Islands. I wore them in transit both times, on planes, buses, and boats, without feeling like i had huge clunky shoes on. Then when I got to where I was going, they performed great on lava rocks, slippery boulders, and dirt trails.

The Lowa “speed hiking construction” means that these are synthetic and made from light materials, but there’s plenty of support in them and enough thickness in the sole and midsole that I didn’t get that flimsy feeling as I have in others where I could feel too much of the surface I was walking on. When I had them on for eight hours or more straight, they remained comfortable. I’ve also used them for bopping around town on the uneven sidewalks of Mexico, where they’ve also excelled, so they’re good general walking shoes for exploration. 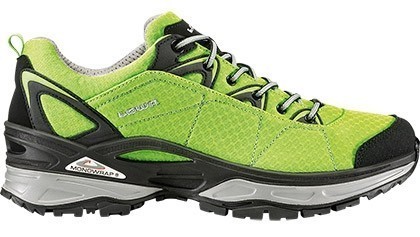 I tried the GTX version with Gore-tex, which meant the sweat was able to evaporate from my hot feet, but when I got caught in the rain or trudged through a shallow stream, my socks stayed dry. In the past I’ve occasionally had trouble with the Gore-tex membrane booty feeling too narrow and constrictive, but that wasn’t the case with these Lowa shoes.

Lowa makes their shoes in Europe, so these are going to cost you a bit more than the ones coming from China, at a list price of $175. (The ones without Gore-tex are less). They’re well-made and built to last, for once I didn’t even have to bend down and re-tie the laces regularly. They come in three colors: the subtle black ones I have on at the top, orange, and these bright green ones. Get more info here and buy online from REI or Zappos. There’s also a women’s version.