It’s summer lake, beach and pool season, plus road trip and festival time. Soon, tailgating will be added to the mix. We’ve been reviewing cooler options, including this offering from Kelty. 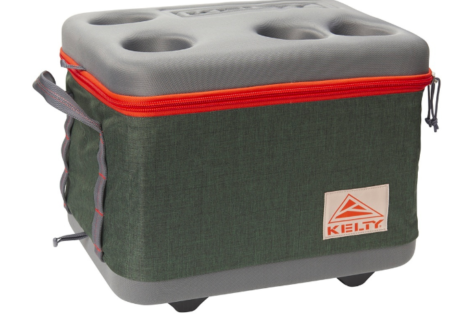 This camp cooler comes in a 25L or a 45L, and allows you to bypass the price tag of a hard shell cooler and enjoy the convenience of both soft AND hard side…allow me to explain. Technically a soft side, the removable foam liner in the camp cooler makes the sides very stiff (this cooler won’t fold or collapse on its own). However, once emptied, it can fully collapse and fold down thanks to the side straps for this purpose. Ice retention is advertised as 36+ hours; during a test in my warm garage, I got 24 hours, and out at the campsite, in the shade, I did get the 36 hours Kelty claims. It’s three pounds empty (25L version), made of polyester ripstop with a PEVA lining. 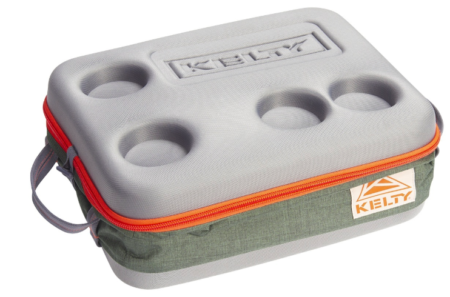 To collapse the cooler, just empty and remove the hard foam lining from the inside, which is attached via strong velcro. This lining then folds flat at the bottom of the cooler, allowing you to secure it in its smaller, flatter size. You get four cup holders on the top, which is a substantially firm surface (great for prepping picnic supplies). Best of all, pick the camp cooler up on Kelty for $79 or $99, respectively, in two nice colors.

If you, like me, can’t get enough packable blankets in your life, pair your camp cooler with a Bestie Blanket. Kelty’s take on a stuffable festival and camping blanket has Cloudsoft insulation and a poly-taffeta shell. It has a decent liner on the underside (though not waterproof or water resistant) and a fill weight of 9.5. It’s heavier and denser than a down Rumpl (it’s not down), but the extra heft could be nice on cool nights. It definitely feels more substantial. It comes in a stuff sack, and weighs 1.8 pounds. Though it could potenially be used by two people who want to snuggle close, the name is somewhat deceiving; this is mostly a one-person blanket, great to toss in the car for whichever bestie needs it. Pick it up on Kelty for just $24 in two fun patterns!