I’m always on a quest for a lightweight running shoe I can pack during all my travels, as I almost always run or workout on a treadmill when I’m away from home.

For several years now, I’ve tried to adopt a love for ‘barefoot’ running shoes, as those would be the natural solution for those of us who like to pack light, but despite many attempts and a general affection for minimalist living, I don’t like barefoot running shoes. I need more cushion and support. 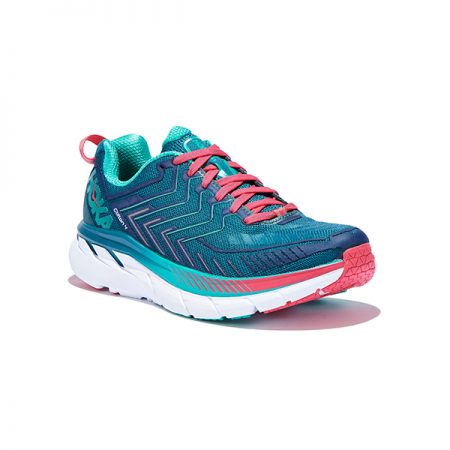 If you’re similar, look to the HOKA Clifton 4, which weighs in at only 1.6 pounds but supports the foot with a high arch and fully padded footbed.

While the HOKA Clifton 4 won’t pack down as small as minimal shoes, they’re just as light, and so I don’t have to worry about my bag going over the weight limit.

And I love running in them.

As I noted, I like a high arch, so bear that in mind, but I find that no other running shoe offers me as much support as my HOKA while remaining light and almost airy to run in.

As you’d expect, the Clifton 4 (and yes, there have been Clifton 1-3…see below) is very fast.

At its core is HOKA’s famed midsole geometry, which has been given an upgraded foam package to ensure consistent cushioning through the life of the shoe.

The forefoot is cushioned and forgiving, and the mesh upper is very breathable. This is a road running shoe (though HOKA does take care of trail runners as well), so there’s not as much meat to the grip and outsole as in some runners, but overall, the Clifton 4 is a good all-purpose, all-terrain shoe.

A word of warning: if you’re already a fan of HOKA running shoes and have enjoyed the Clifton 3, you may find the 4 to be quite a different shoe.

I have not personally tested the 3, but many reviews state that the shoe is very different from that version. However, the 4 is quite similar to the 1, which may explain why many fans of the HOKA Clifton 1 are pleased with the HOKA Clifton 4.

The Clifton 4 comes in a whole slew of fun, vibrant color combinations, including blue coral, topaz, castlerock (a somehow still bright gray), dubarry (which is like a bright coral), red-orange, and a classic black and white.

It retails for $130 on the official website, and you can find the Hoka One Clifton 4 on Amazon as well.