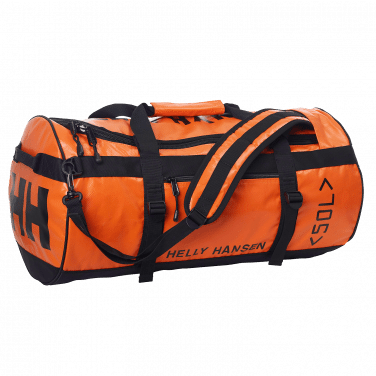 You can’t go wrong with a classic. If you need a waterproof, rugged, all-purpose duffel bag and want to pay a bit less than you would for most adventure-gear brands of a similar size, Helly Hansen’s 50L duffel is for you.

Helly Hansen offers their duffel bags in 30L, 50L, and 90L for  $75, $90, and $110 respectively. I don’t usually open my reviews with the price, but it bears noting the value here: you get all the features you’d expect in a high-quality duffel for a price that makes you want to buy two. Or three.  I’ve been putting ours through its paces for eight months now, and it shows literally no sign of wear.

It’s pretty, too. When the 50L duffel arrived in our household, it caused an argument between my teen and tween sons; each wanted to claim it as their own new carry-on bag. I settled things by taking it for myself. In the months since, my oldest has reclaimed it, putting it to use as a ski gear bag. It’s so versatile, it’s been pressed into service as a day bag for snorkel gear, too.

Let’s go over features: don’t expect a lot of bells and whistles on the Helly Hansen duffel. Like others in its category, the genius is in its simplicity. But it does deliver on details. The bag is made of tough nylon tarpaulin, with extra flaps to fold over zippers and keep moisture out. Its water-resistency is what makes it a great ski or snowboard gear bag. You get compression straps to tighten everything down (and fit into airline overhead compartments) and a zippered pocket both inside and outside. There’s a name tag holder and a padded shoulder strap, but I’ve saved the best for last: hideaway backpack straps that allow you to carry the duffel on your back. As mentioned, you can tuck these straps into the bag, but we keep them out full-time.

The duffel features a nice U-shaped extra-rugged zipper to completely open up the bag, and stiff end panels makes it possible to stand the duffel on one end (great for easy storage or for resting between your knees on a bus, shuttle, or plane). It comes in a nice variety of shiny colors including orange, white with red accents, blue, red, black, or purple. Buy straight from Helly Hansen for $90, or pick one up on Amazon for a few bucks less or look at Moosejaw.

Posted in Luggage and Bags