Give Others a “Glympse” of Your Travels 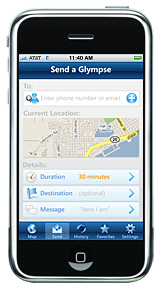 Ever wish, on a long road trip, that your family could know where you are and when you’ll be home—without making phone calls along the way?

Or did you ever fly into a town, hop in a rent car and want to let someone know when you would arrive for a meeting?

Now, you can “share your where” with Glympse, a free app for GPS-equipped iPhones, Android, and Windows Mobile phones.

Glympse will send your location information over cell phone data channels and let you share it with anyone who has access to a desktop or laptop computer, or a mobile phone with a Web browser. Glympse will show your position on a map, along with travel speed and even an estimated arrival time, if you set a destination.

Testing the software on my AT&T Tilt2 smartphone, it worked amazingly well. The first step is opening the program and choosing who to share the information with and for how long. Then, Glympse will send them an e-mail or text message with a link to the company’s website. Whoever received the Glympse message does not need any special software or registration. The only thing required is a Web browser.

My travels showed there is a slight lag, about one block, from your actual location to the spot shown on the map. But that’s to be expected, since it does take a few seconds for the program to send the information and for it to update on Glympse’s servers. Still, it’s about as close to real-time as you can get.

The movement shown on the map is slightly jerky, not buttery smooth. But that’s understandable and the position updates are still very frequent.

I didn’t notice any huge battery hit when using the program on the phone. But it would be a good idea to hook up a charger if the program is running for a long time.

Glympse also addresses privacy and security issues. It’s not possible to “forget” you gave someone permission to view your whereabouts and thus allow them to track you 24×7. When you start the program, you choose who to allow to see your movements and then set a time limit, up to four hours. For longer trips, the time window can be easily extended.

The minimum age for using Glympse, under the company’s terms of service, is 14. It seems that would be difficult to enforce, though.

For many uses, Glympse is better than other location-sharing services such as Google Latitude. Latitude requires registration and a software download for everyone who uses it. But those who receive a Glympse invitation can track your travels just by following a web link, with no special software or log-in required.

If you’re using a Blackberry phone, help is on the way. The company plans to support Blackberry’s operating system in the next few months and is also working on versions for other popular phones.

There are many uses for Glympse—helping with busy business schedules, keeping up with friends and offering peace of mind to families. Just a decade ago, who would have ever imagined?

John Gordon is a Texas-based video producer who travels extensively in search of interesting stories. Technology plays a big role in his work, from digital recording to uploading photos and videos from far-flung places.