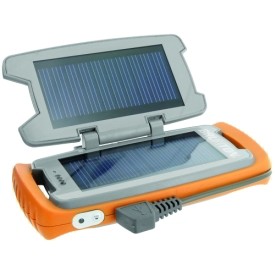 If we’re not all charging up our music players and cell phones with solar power, it’s not for lack of trying on the part of device manufacturers. Some of these solar devices actually work quite well too, like this portable power supply from Brunton.

The first idea here is you can charge it up at home or in a car ahead of time, like the iGo Power Extender and  CallPod Fueltank Charger we reviewed before. Then you take it with you on a trip, using it to charge up your devices when you can’t get near an outlet, like on a plane or bus.

This goes a big step further though. The second idea is to use it as a solar charger when you are on a long camping or mountaineering trip off the grid. With the Brunton Restore and ample sunlight, you can restore your devices to full power. If it’s fully charged, it’ll reload your iPod or regular cell phone two or three times. It’ll fully charge a smart phone or gaming device one or two times. It has enough juice to recharge four AA batteries and can recharge your Bluetooth headset seven to eight times. For an iPod, one hour of sun equals six or seven hours of music—that is far superior to what most other competitors promise.

I left the unit in the sun for seven hours and it was all charged up—I could tell from the handy 4-light LED system. I was then able to fully charge my iPod twice and a half-empty phone and still have juice left in it. 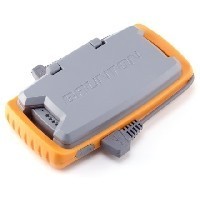 This Brunton version is a bit heavier than some others I’ve tried, at 7.2 ounces, but it’s rubberized and really solid. It feels like it could be dropped off a roof and survive. It’s water resistant too. It flips open too and exposes two rather large panels, making it easier to operate (especially with one hand) than the three-panel Solio charger I’ve tried before.

There’s a handy design to this whereby you can plug in a USB cord to charge up anything attached to that, or you can pull out the male USB plug and insert it into the device. Or pull out the other end of the cable instead and it goes into a mini-USB slot like you see on Google phones and the SlotPlayer for example. There’s an adapter for micro USB as well, which other devices use. So basically you’re okay charging up any music player, communication device or camera, provided it uses some version of USB.

“But Tim, my damned Nokia phone and my damned Samsung phone need different adapters than these!” Well, there’s the biggest drawback with this. Eventually we’ll get to a happy place where every device shares the same standard charger setup, but until that time you have to keep fooling with tips and adapters. Brunton doesn’t offer any help in that department, so if your device doesn’t come with some kind of USB charger, you’re SOL unless you can find some adapter on eBay that will do the trick. For Apple devices, you’ll have to bring along the USB cord to connect the device to a USB port on the charger.

The Restore retails for around $90, but the packaging says it’ll give you the output equivalent of 1,372 AA batteries. You can use this charger 500 times before the internal battery will wear out, which is probably plenty for a lifetime unless you’re a hermit moving to Death Valley. If you’ll be in the wilderness or you’re just a backpacker who will be in a place where sunshine is far more prevalent than reliable electricity, this is a solid solar charger that really works.

Get the Brunton Restore Portable Power Device at Backcountry.com or Amazon.

Stay connected to the #1 travel gear blog – Get the RSS feed or follow Practical Travel Gear on Facebook.

Tim Leffel is founder of the Practical Travel Gear blog, as well as the Cheapest Destinations blog and the narrative webzine Perceptive Travel. He is the author of The World's Cheapest Destinations (now in its 4th edition), Make Your Travel Dollars Worth a Fortune, and A Better Life for Half the Price.