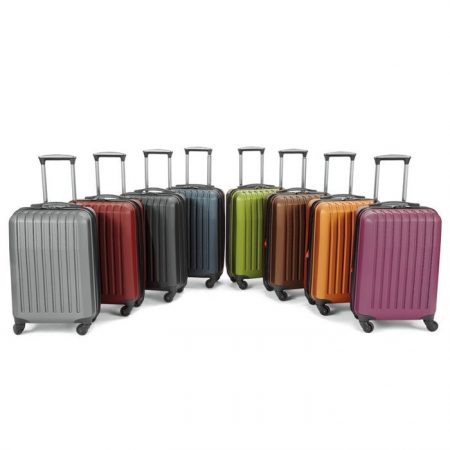 Since we last reviewed Brookstone’s Dash rolling carry-on bag, airlines have continued to reduce the size of approved carry ons making previously purchased luggage less useful. European airlines are more strict than others, and Brookstone made adjustments a few years ago in response to several carriers lowering their cabin limit.

Even with these reductions, this bag does not fit into the carry-on units at the gate when packed full, but then again, very few bags actually do beyond a backpack, briefcase, or small duffel bag. This polished hard-shell case still remains a top choice for frequent flyers because of its durability and easy-to-spin four wheels.

On its own, the bag is extremely lightweight, which is a major plus when traveling for longer periods of time. It allows you to pack more without concern. No matter how fragile the contents of your bag, the tough exterior protects them against damage from being tossed around carelessly by baggage handlers. The sturdy pull up grip handle continues to hold up well even when bellmen decide to lift the entire bag, fully loaded from the extended handle rather than the bag’s own handle.

The interior features a zippered pocket keeps my dress shirts or loose items apart from the rest of my stuff with strap closures to keep everything in place. One of my favorite features is the exterior zipper that helps the bag to expand by another three inches, which is always a lifesaver on long trips.

The one caveat with this bag is its wheel casing system, and despite this being a popular item, it still has not been adjusted despite new versions of this bag coming along. I love the four wheels allowing the bag to swivel 360 degrees and roll with ease on most any surface. The problem arises when you stuff the bag to capacity and attempt to roll it quickly and frequently. When the wheels begin to heat up with friction after frequent use, the back wheels too often fuse to the side of the casing system eventually rendering the wheel useless as they no longer roll.

Thanks to Brookstone’s one-year warranty that comes with the bag (and the extended two-year warranty I purchased), I have exchanged this bag numerous times because the same problem with the wheels occur. I swear by the durability of the bag itself and the extension handle, but encourage very frequent travelers who spend more than a few days away from home and travel with plenty of gear to know that the wheels will give you trouble if you consistently pack the bag to its capacity and walk briskly since it builds up the friction.

The Dash bags come in three sizes and various colors including pink, charcoal, and black. The more-than-fair price makes it an extremely popular purchase when compared with its more expensive luggage competition. This excellent product is meant for light travelers with a stylish demeanor in their step who wouldn’t be caught dead with American Tourister tags. Just remember to wheel slowly and tread lightly to protect those plastic tires. It can be purchased on Brookstone’s web site or via Amazon.