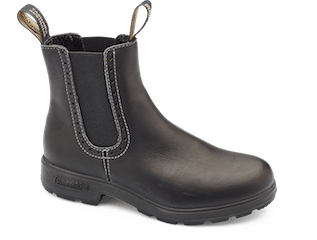 As an American consumer and traveler, I hadn’t heard of Blundstone footwear, an Australian boot company. I’m very glad I was introduced! These classic boots have clean lines, rich leather, and rugged soles…basically everything you need in a quality winter and fall boot, and nothing you don’t.

I tried out Blundstone’s women’s boot, in black leather. I wanted something that would be versatile for traveling in winter, would go with multiple outfits, and not take up too much room in my carry-on. I really like the height of the boot: it comes over my ankle for solid support, but is definitely a low-rise boot, which means it’s not too bulky to pack. You get a polyurethane midsole with cushioning, and a thermo urethane outsole. There’s a steel shank and removable footbed, which I’ve found is pretty standard in high quality boots and shoes.

Right out of the box, I really liked the streamlined, classic look to the boot. The leather is shiny and luxurious, and the lack of laces keeps the design very simplistic, in a good way. On my foot, the Blundstone didn’t have as much cushion and support as I’d like, but pairing it with my own sole insert really improved matters. The boot looks fantastic with slacks and jeans and equally good with leggings and tights, which is always my ultimate goal in a travel shoe: flexibility with various outfits.

Pick up a pair for $180 on Blundstone’s US website in one of five colors, ranging from black to brown, burgundy, and tan. Also available on Amazon and Zappos and Planet Shoes for a similar price point.

Next, we checked out the children’s offerings, cutely named Blunnies. The come in no fewer than nine color choices, most of which are unisex. Of the nine, three have added detail on the stretchy side panels: kids can get a camo design, hot pink, or multi-stripe. My ten-year-old son opted for brown boots with multi-stripe to add some color. Most of the time, the stripe part is hidden by his pant leg, but the design makes it easy to spot his boots in a pile. Like the women’s version, Blunnies are made with quality leather, with a removable footbed. As a nice touch, also included is an additional footbed to extend size range. You can order up, and use the extra footbed until your child truly grows into the boot, then remove it to get more life out of the shoe. Genius! 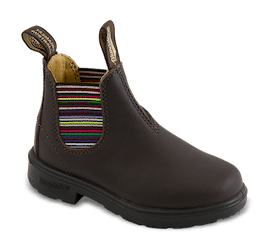 The outsole and heel are tough, with good traction for winter weather. My only complaint: because these boots, like the adult version, do not lace up, but rather slide on, it can be somewhat of a struggle to get them on, even with the handy loops at the top. Maybe that’s just a problem in our house…we have wrestling matches with shoes on the regular!

A few extra details: Blunnies aren’t snow boots…you’ll want something with higher coverage for that, but are absolutely perfect for travel and winter city touring, where you want a boot that will look nice, but also can slosh through puddles and snow or slush. Our boots came with packets of Nikwax waterproofing solution, which we used to fully waterproof our boots, another very nice touch.  Pick up a pair for kids in sizes toddler 8-youth 4 for $110. We also found them on Zappos and Amazon.

Note: Blundstone also has a wide variety of men’s boots, from work boots to casual boots.