Nothing could be more important for a frequent traveler than a sound night’s sleep. After nights in different hotel beds, pillows of different thickness, airplane seats (sometimes barely reclined), and jet lag effects galore, the Airweave portable mattress topper really saves the day. 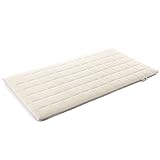 The Japanese company is known for its mattresses and mattress pads for their superior quality and airfiber core meaning there are no springs inside.

The mattress is composed of mostly air surrounded by a protective core so it really is like sleeping on cloud nine, not a foam surface. That must be why the company was chosen to provide its 8.5 inch-thick mattress pads to top Team USA athletes during the Olympic Games in Rio de Janeiro.

The company also provided them to athletes at the Sochi Olympics, and close to 33 percent of the medaling athletes were members of Olympic Teams to which airweave supplied mattress toppers! 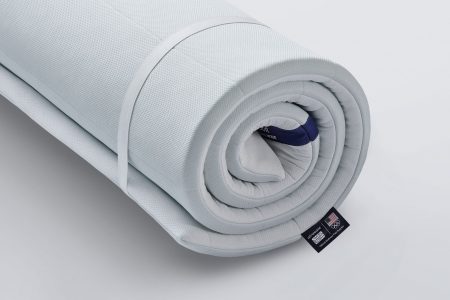 Many luxury hotels swear by them, and first and business class passengers on Japan Airlines slumber atop them inflight.

The portable mattresses insured that athletes were well rested for competition, which is good enough reason for me as a frequent business traveler to try it out.

The air fiber core rebounds quickly to your body’s movement.

I do not move a lot when I sleep, but I do tend to get pain in my neck and back if sleeping incorrectly. This mattress topper proved the perfect remedy to that problem.

As someone who carries rollaboards on the plane instead of checking, this was a bit more of a challenge, but the topper comes in a sleek travel bag that is easy to put on top of my rolling bag and fits behind other bags in the overhead bin.

When I get to the hotel, I simply unravel it on top of the existing mattress since it is a lengthy topper fit for a queen bed.

A cool feature of this mattress topper is that it has two sides; one side is firm while the other is soft, and you can flip it for your preferred option. When you’re finished using it, you simply roll it back up and place it in the carrying duffel.

Airweave offers those interested in trying it out a 60-day trial period to decide if they like it. As someone who often gets hot when I sleep, the air fiber core helps to prevent that.

Your body heat often seeps into the mattress, but with the air fiber core of the Airweave, it simply passes through, which is a huge plus for me.

The breathable and lightweight material make this a pleasure to rest on while also carrying it around during your travels.

Airweave says that the body temperature regulation benefit of its mattresses is one of the most popular features, and I would have to agree.

The ergonomic mattress toppers are only 8.5 inches thick and come in various bed sizes. The Team USA topper costs $1,300 for the queen-sized model and is available on the Airweave website with free shipping.

Other Airweave mattresses and topper sizes and widths are available on Amazon.

Ramsey Qubein is a travel journalist who has visited 154 countries covering the hotel and airline industry from every corner of the globe. His work appears in travel publications and outlets including Travel+Leisure, Business Traveller, Airways, Singapore Airlines’ Silver Kris, US Airways magazine, Northstar Travel Media, Yahoo Travel, and BBC. He serves as the National Hotels Travel Examiner and writes for numerous blogs and web sites. He travels more than 350,000 miles a year and is highly recognized as an expert in loyalty programs, business travel and the luxury travel segment. You can follow him on Twitter at DailyTravelTips or at his website www.RamseyQ.com.
Posting....